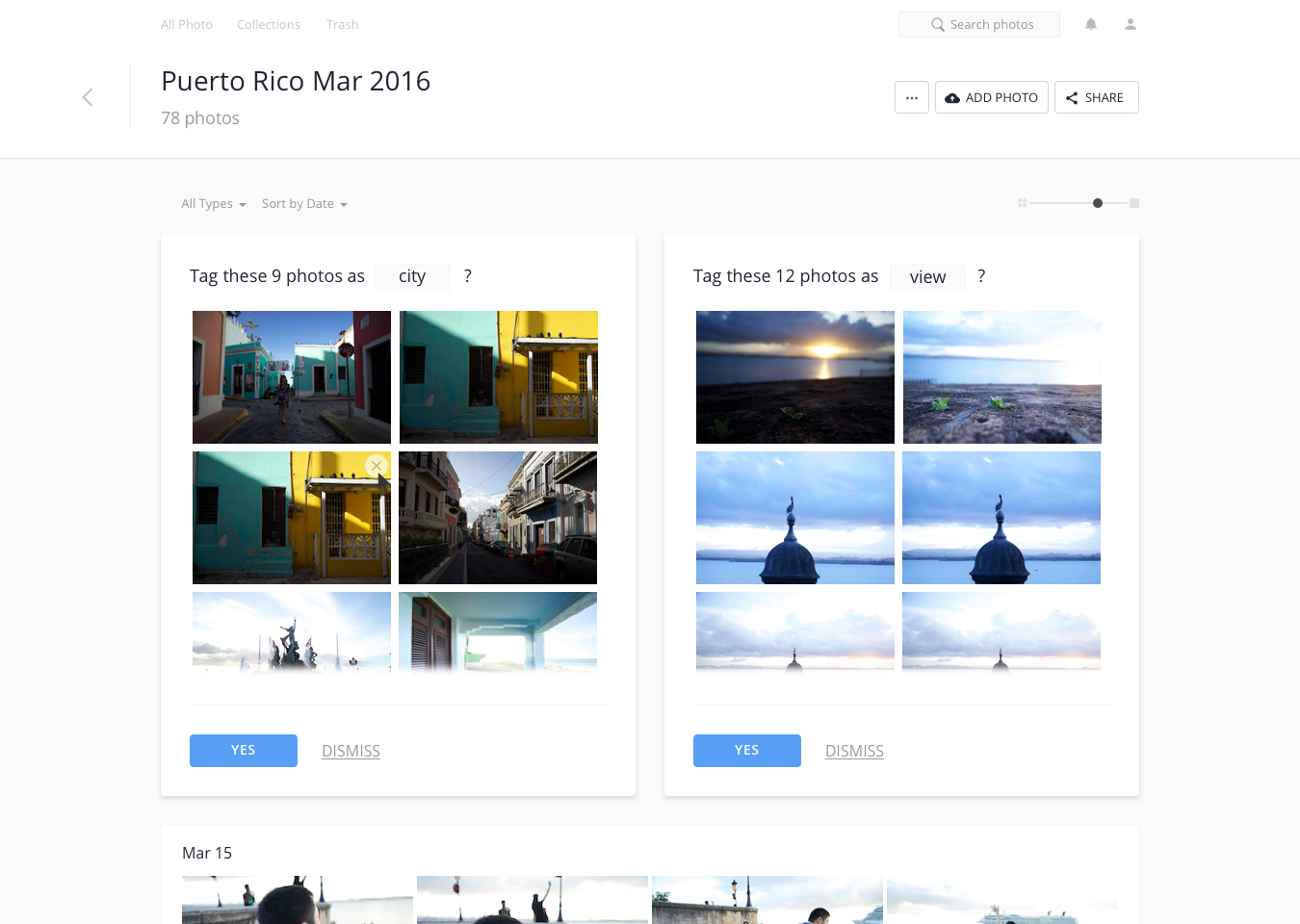 NEW TECH DOESN'T FIT IN WHAT PEOPLE ARE USED TO

A lot of people organize their photos in nested folders. However, when the entire folder is uploaded to most cloud-based photo applications, all folders you used are removed, which tells you: “Hey! Our app provides a great experience in organizing photos, you can group your photo right here, again!” 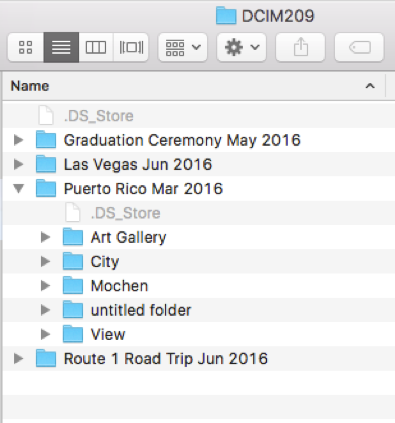 When my interviewer, Tracy, transferred all photos in the camera, she created all these folders and sub-folders to organize the photos she took in the past few months. And she is not the only one.

It’s understandable to remove folders because it’s such a pain browsing photos in folder structure. But should the process be more communicative and supportive on how people originally organize their photos and not result in the following quote:‍

BETWEEN THE NEW AND OLD

To get those people on board, we need to create a way that “accommodates” their original organizing method while helps get rid of the “aged” folders.

If we take a look on the naming of these folders, we will find that some of the sub-folder are essentially used as “tags”. And people do realize using folders are painful when it comes to browsing photos. This means people are not mad about the “folders”, but about “changes”. More precisely, changes without communication. 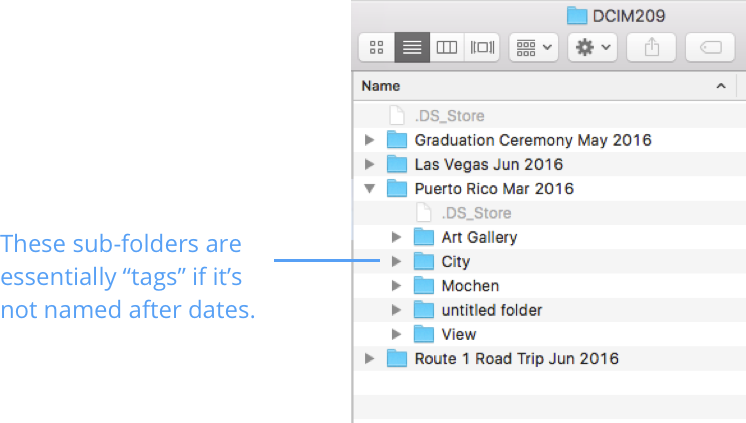 So if we can achieve the following, we will bridge the gap and bring more users on board:
1) turn folders into tags based on user’s habit
2) be more communicative about the change
3) provide a easy way for users to manage and use tags

Users will be prompted to create a collection named after the folder that is uploaded. Then user is prompted to tag a set of photos, for example as portrait, because the system thinks it is based on previous tagging. 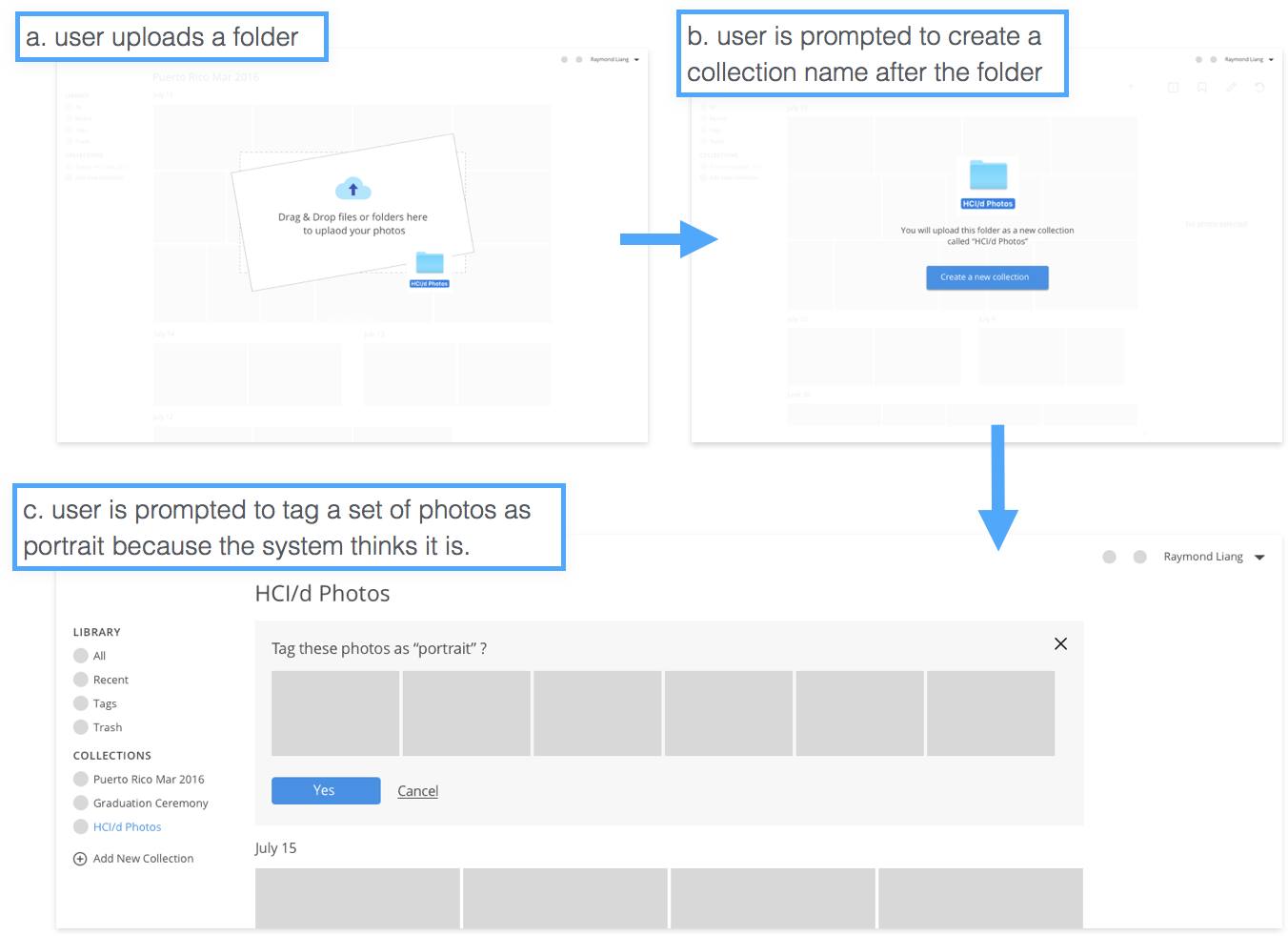 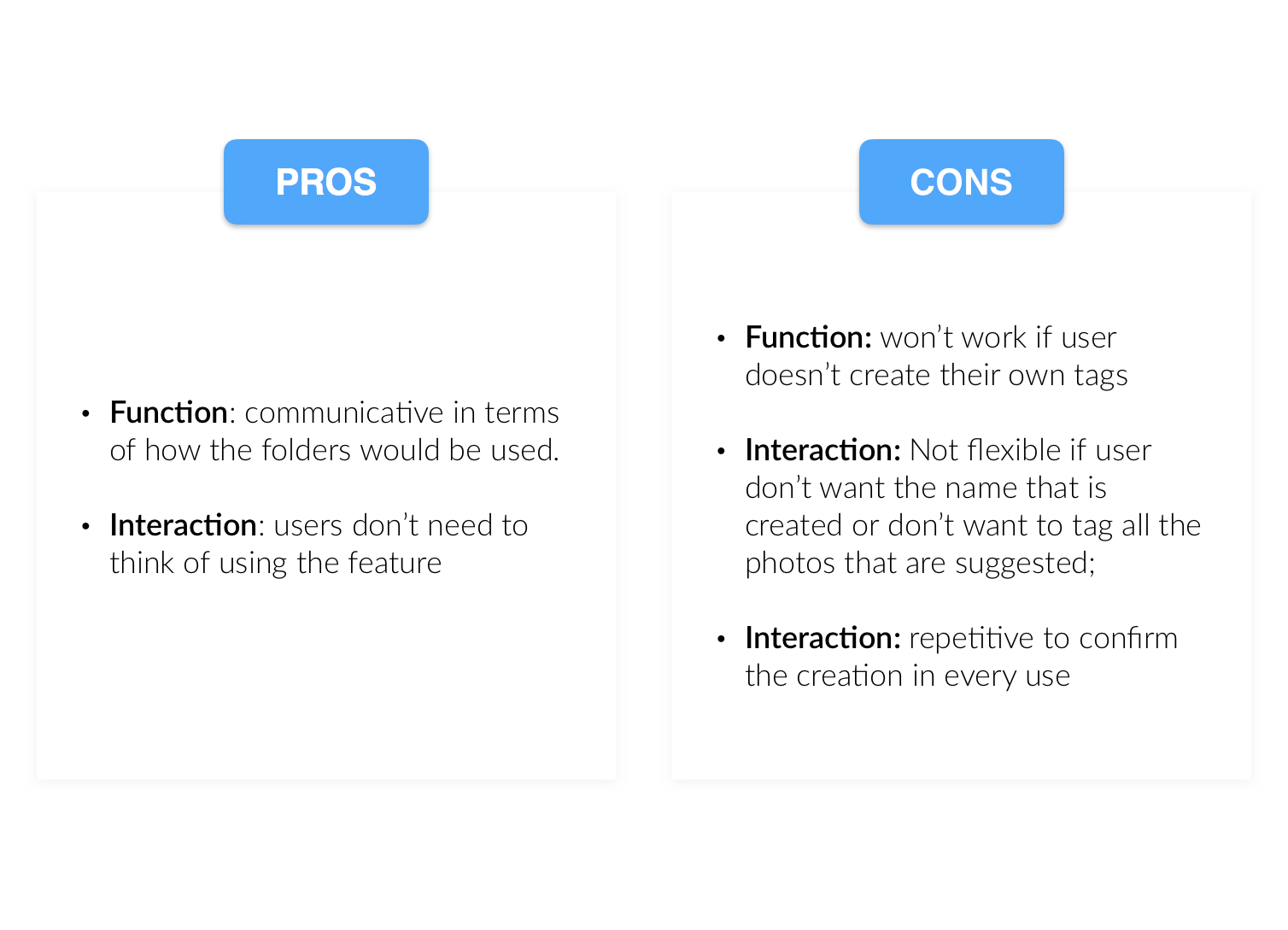 II.Group in name of sub-folder and suggest collection naming 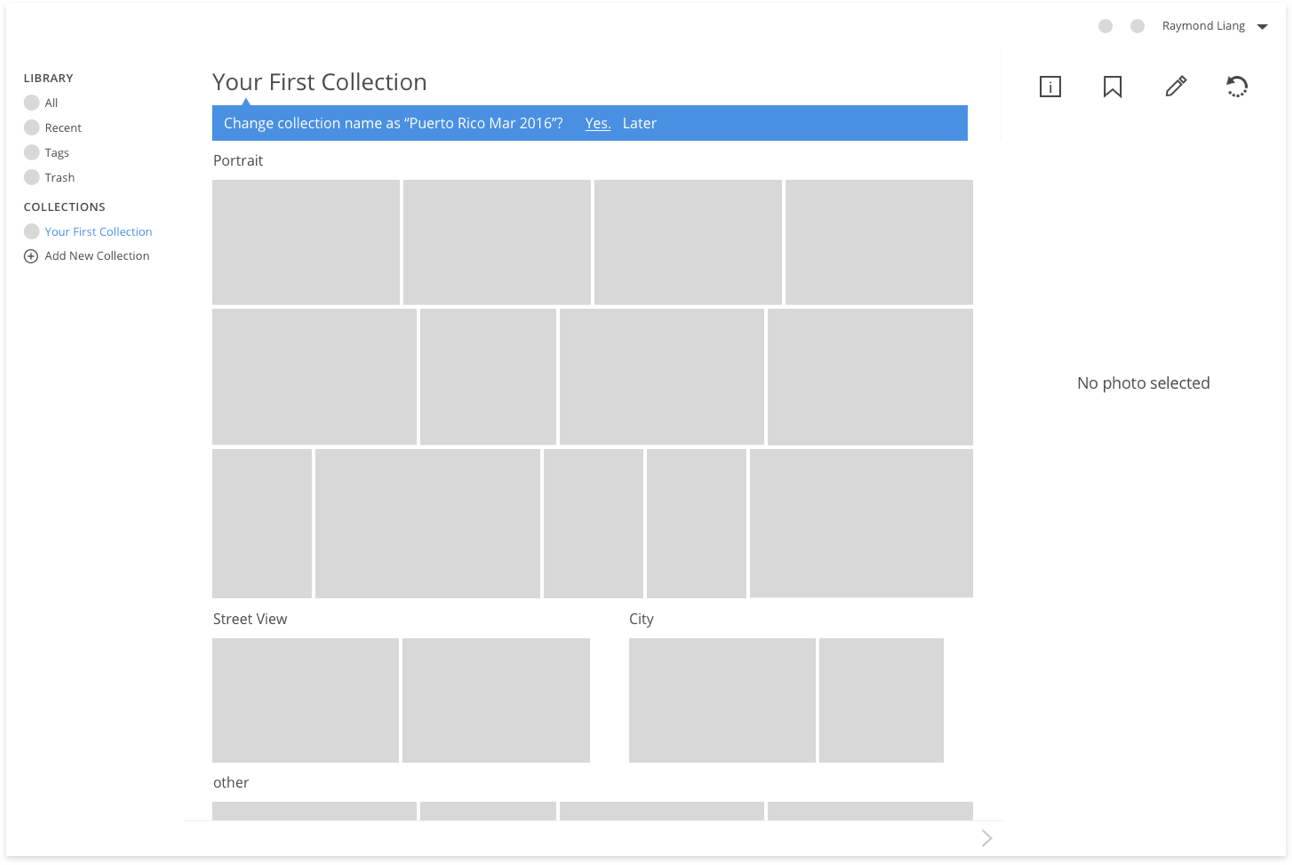 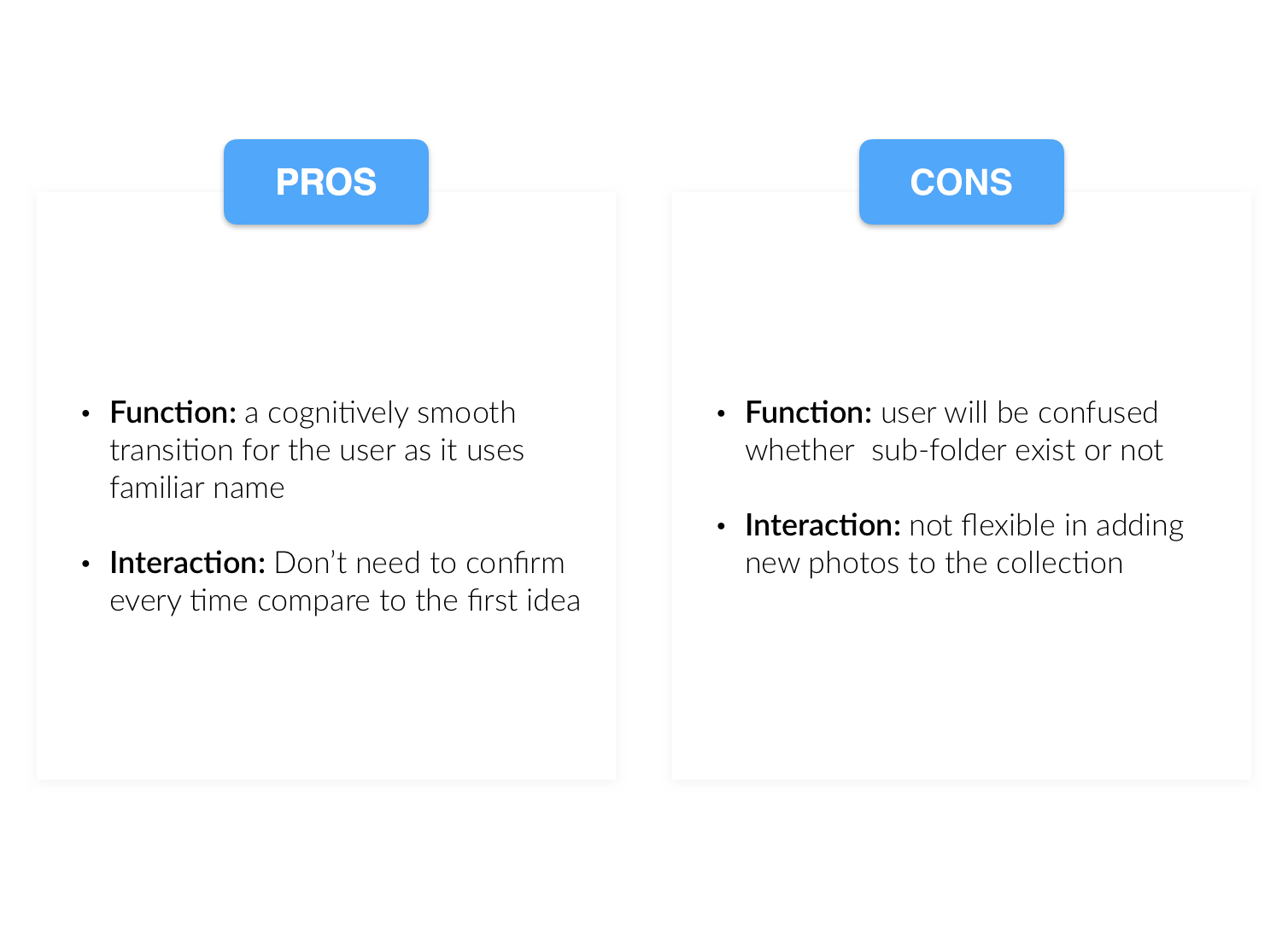 III. Create tags based on the name of sub-folder

After uploading the folder, tags will be created as the name of the sub-folder. User will be prompt to tag photos and have the option to deselect those they don’t want. 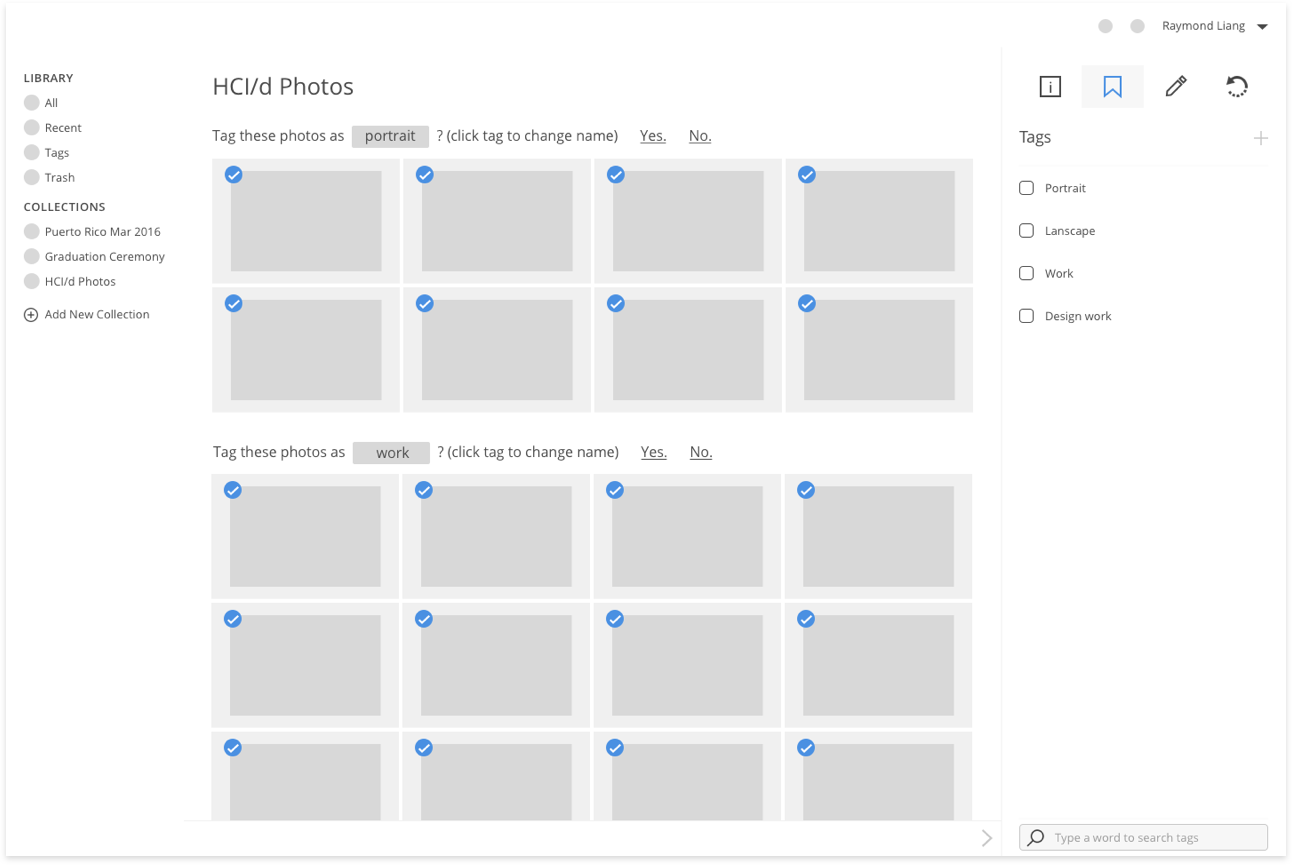 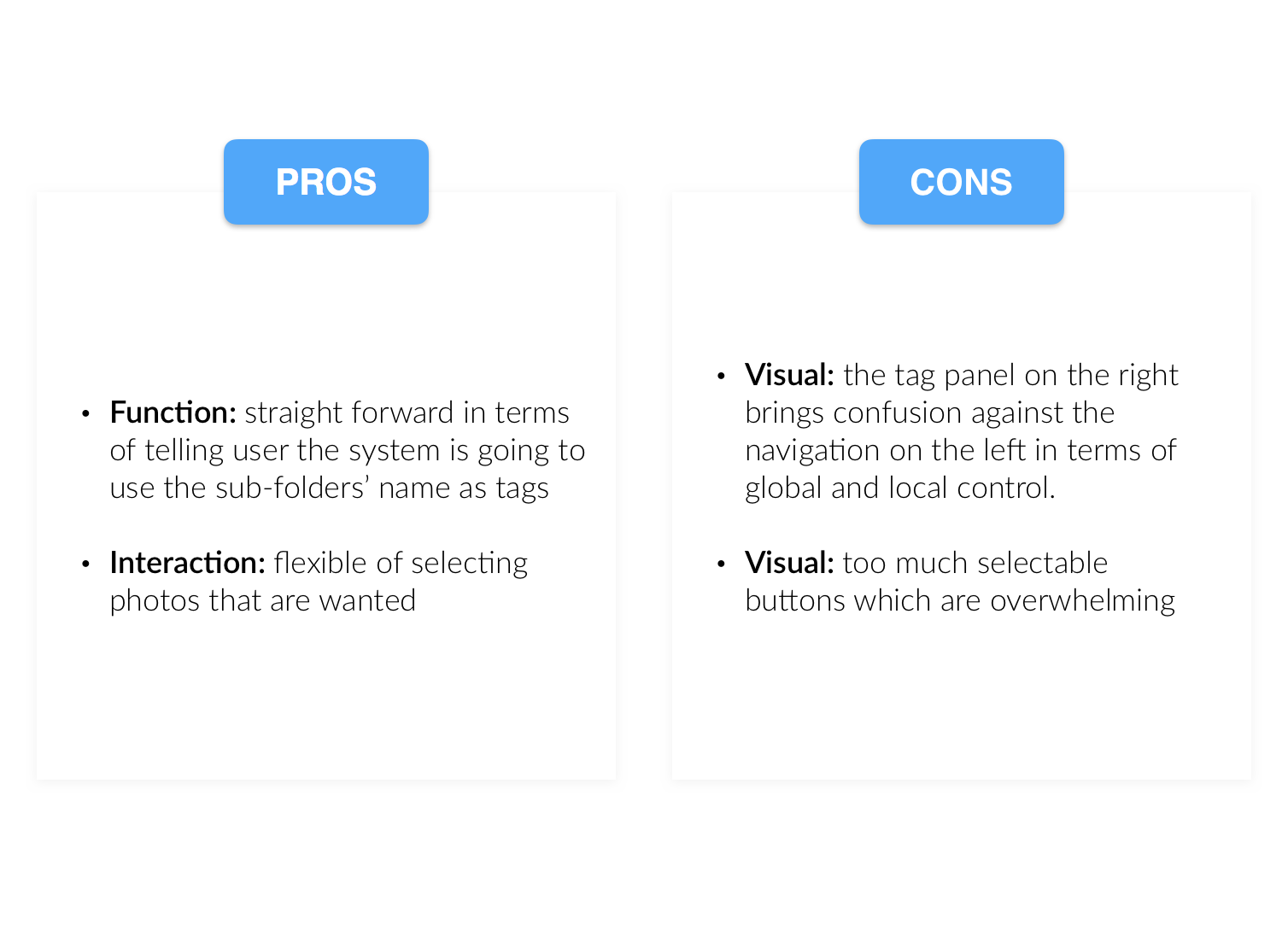 TAG AS YOU NEED

Based on all testing feedback, I created the final design with 4 main changes: 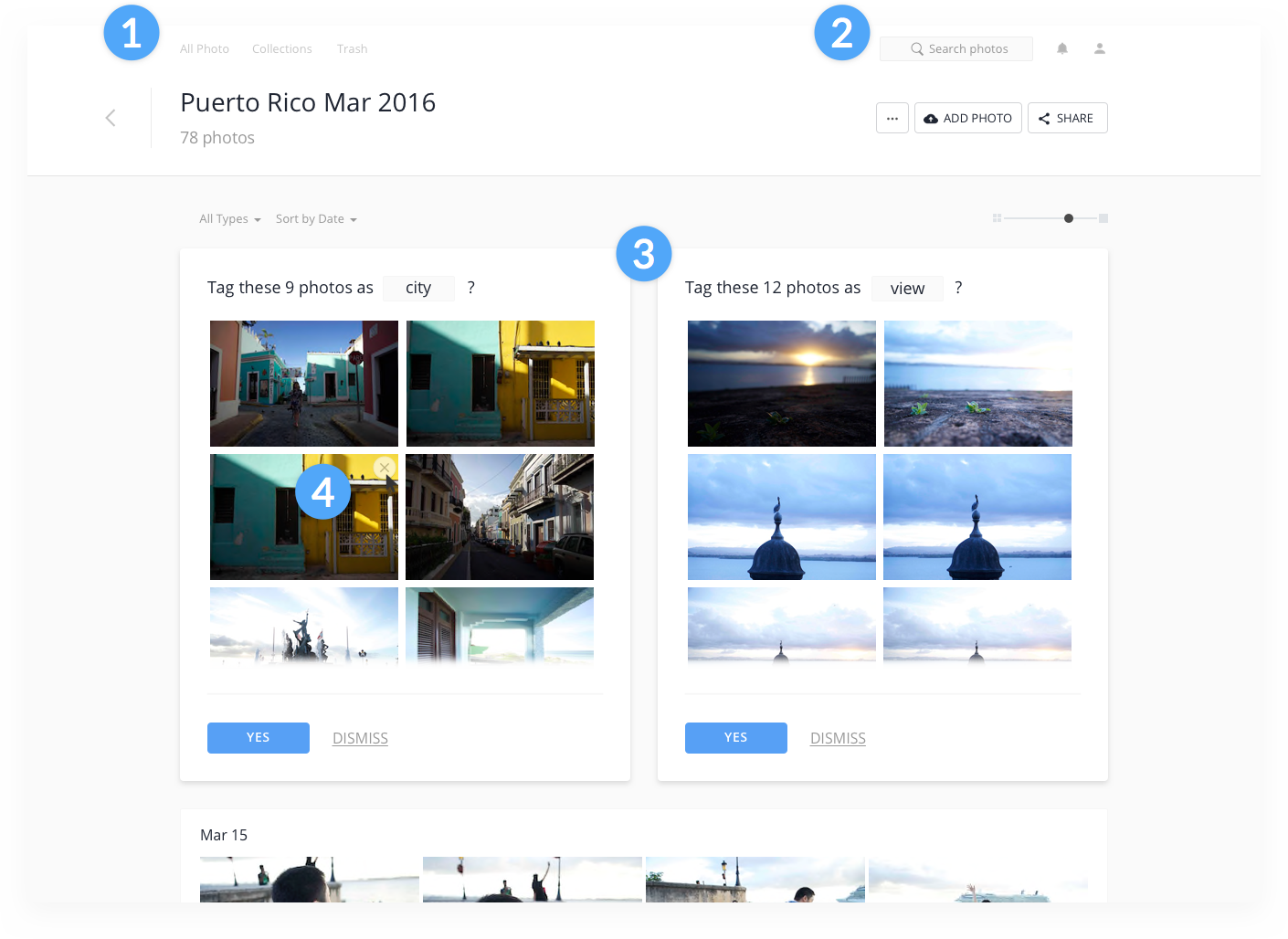 1. Navigation is demoted in visual hierarchy. Because I found switching among sub-tabs in “All Photo” and switching among collections are not a frequent use case. All these sub-tabs don’t need to be expanded and shown there. This solves a problem of scaling the layout in mobile end.

2. Tag panel became a global access through search bar on the top right. Because 1) tags are mainly used for searching photo, they only need to be shown when user wants search photo. 2) User manages tags when they tag photos: add tag, change name of tag, delete tag. They rarely manage tag as soon as they log in the application. So it don’t need to be shown in the main panel. 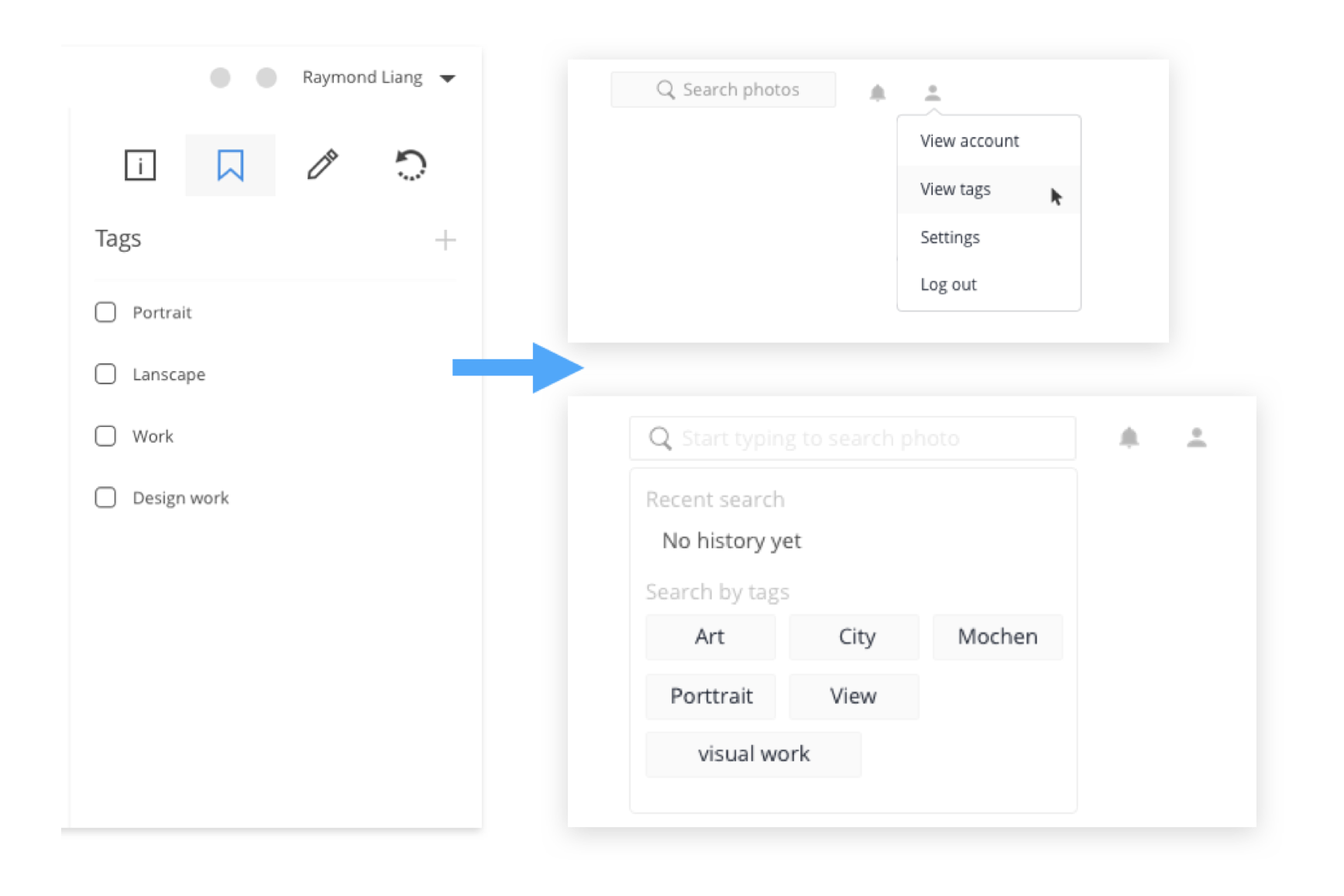 3.Suggestions cards. To make the presentation of suggestion more consistent with the photos, cards is used as the form to wrap information. 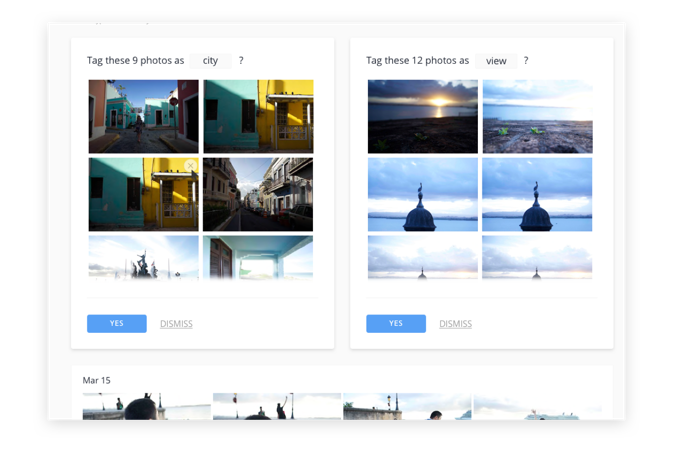 4. A easier way to handle exception. Instead of deselecting, one can just hover on a photo and remove it from the list. 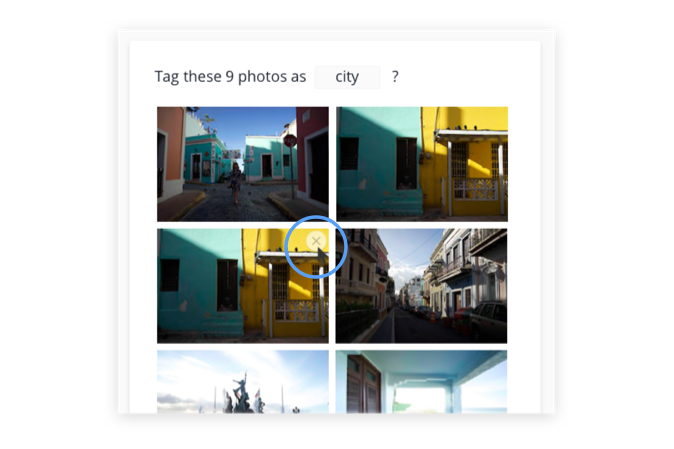 I will show a click through demo of the design below. It contains 5 parts:

1. The user uploads a folder of photos with sub-folders in it.
2. The user creates a collection of photos named after the folder.
3. The user chooses to tag a set of photos as the name of sub-folders
4. The user tags a photo
5. The user select multiple photos and share

You can view entire demo here: 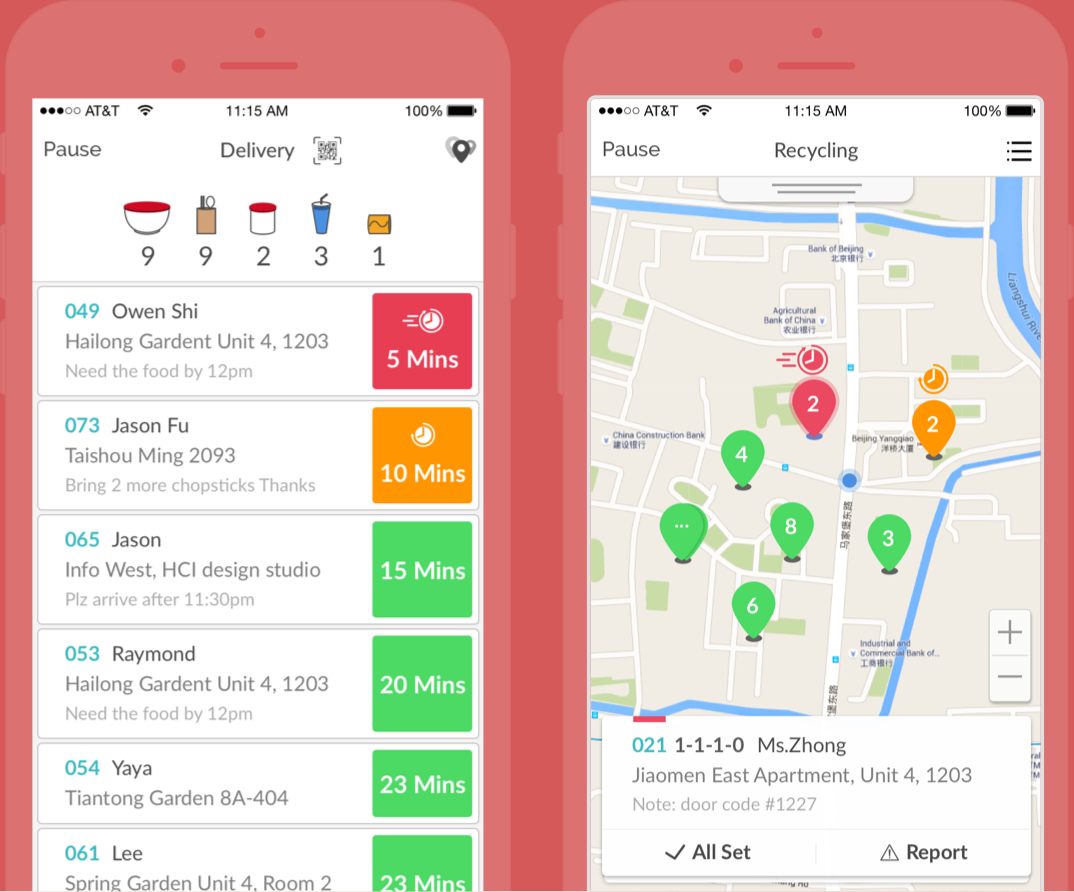 © All rights reserved. Crafted with whiskey and sushi 🥃 🍣.